If and how should online media companies exercise censorious power over people on their platforms? How do we support and protect critical and honest independent media? What is Project Censored, and how can it support the development of critical media literacy in college and university classrooms?

In today’s podcast we talk with our guest Mickey Huff on these issues and more. Huff is the current director of Project Censored. He is also the president of the nonprofit Media Freedom Foundation, and professor of social science and history at Diablo Valley College (where he is co-chair of the History Program and is chair of the Journalism Department). He edits or co-edits the Censored book series for Seven Stories Press. His publications include the co-authored work with Nolan Higdon United States of Distraction: Media Manipulation in Post-Truth America (and what we can do about it) (City Lights Books, 2019). His research explores media and propaganda, fake news, and critical media literacy. He is a co-founding member of the Global Critical Media Literacy Project. 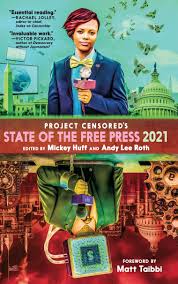 *Click here for the Andrew Austin essay, “Defending the Digital Commons: A Left Libertarian Critique of Speech and Censorship in the Virtual Public Square,” published in August 2018 by Project Censored and used by James in a lesson for a media studies class.

*Click here for Alan Macleod’s piece at Mint Press News about approximately 24 hours of video from the Critical Media Literacy Conference of the Americas 2020, which Project Censored sponsored, ironically getting censored and removed from YouTube.

*Click here for the joint statement from Its Going Down and CrimethInc. in regards to Facebook deleting their accounts and the pages of other anarchists and anti-fascists.

*Click here for the Las Vegas Review-Journal story about proposed legislation that would allow tech companies to create their own local governments in Nevada (!?!?!?).

*Click here for a commentary and interview piece, authored by Matt Taibbi, which James intended to cite when referencing the World Socialist Web Site, Twitter temporarily banning the International Youth and Students for Social Equality [IYSSE], and the anti-censorship advocacy of Pink Floyd’s Roger Waters in this episode’s outro discussion.

*Click here for a book review (of Matt Taibbi’s, “Hate Inc.: Why Today’s Media Makes Us Despise One Another”), which James authored and should have plugged (in what would have been and now is another instance of shameless self-promotion) during the outro discussion of the issue, raised in the review, of news organizations embodying what Elizabeth Anderson has referred to as “private government” in their role as employers.

*Click here for a piece Nathan J. Robinson wrote about major media silencing and penalizing critics of Israel, and about The Guardian firing him for related tweets – a subject discussed after the interview in this episode.

*Click here for the CNN story (referenced in this episode) about the network terminating its contract with Marc Lamont Hill after remarks he made about Israel and Palestine.

*Click here for the piece at Jewish Currents, “The Real War on Free Speech,” which James mentioned during the discussion following the interview in this episode.

*Click here for the ACLU’s statement – alluded to in the post-interview episode discussion – affirming that policy/legislation suppressing boycotts in the US are unconstitutional, which could have implications for political speech pertaining to the BDS movement on college campuses.